With brain-swapping aliens poised to attack, the Doctor and Nardole link up with an investigative reporter and a mysterious figure known only as The Ghost. Can the Doctor save Manhattan? And what will be revealed when we see behind the mask?

The 60 minute Doctor Who Christmas Special is written by Steven Moffat, Executive Produced by Brian Minchin, Produced by Peter Bennett and Directed by Ed Bazalgette (Poldark), it was shot in Cardiff at BBC Wales Roath Lock Studios. 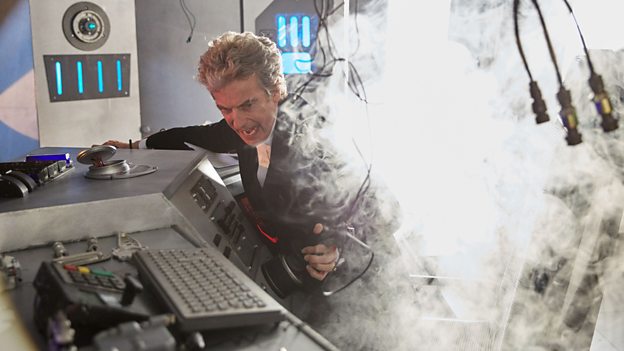 What can audiences look forward to in this Christmas Special?

I think with the Doctor Who Christmas Special this year, audiences can look forward to a real Christmas treat. It’s nostalgic in the sense that it’s going to be a superhero story from the days when superheroes were ironic and witty and clever. It’s also set in New York and we have a fabulous American cast and some spectacular flying scenes – you’ll believe a man can fly. And we have The Doctor and Nardole and returning nasty monsters. Villains, good guys, bad guys, bit of snow, some children and maybe a hint of Santa Claus. Be there, watch it and have a wonderful Christmas!

What was your reaction to reading the Christmas scripts?

When I first read the script I thought “this is wonderful” because it captures the delightful, light comedy touch that existed in the early Superman movies with Christopher Reeves. Superheroes nowadays tend to be a grim lot but in those days there was optimism and a deliberate naivety that the character of Superman had which was very attractive. But also the way the scripts were written back then reminded me of Spencer Tracy or Katherine Hepburn kind of scripts – they were very witty, very knockabout, very American. This script is like that so I was very happy to read it and to go with this whole idea of the Doctor observing a superhero – it’s great fun. Doctor Who is an extraordinary programme – it allows you the opportunity to almost have a different kind of genre every week not just a different kind of plot so this is very much a light-hearted superhero romp.

Can you talk to us about the casting of Justin Chatwin as Grant/The Ghost?

Justin as The Ghost is amazing because he’s able to do both of those parts – The Ghost and the mild mannered Grant – and he’s got two different voices that he uses for them. I think comic lightness is a greatly undervalued thing – to be as funny as he is and light but with accurate delivery. He has great charm, a movie star quality which is lovely. The Ghost is a slightly flawed superhero and he’s spot on with all of that. He’s been great to have around.

How did the role come about?

I got a letter sent to my agent from Ed [Bazalgette] and Peter [Bennet] just saying that “we’re doing the Christmas Special of Doctor Who, here’s the script and here’s the deal and this is how long etc” – it’s how most scripts come about. I read it and I said “This is the best thing I’ve read all year”. It was really funny and really entertaining and when an actor gets writing that’s as good as that it’s really hard to say no. The calibre of acting is phenomenal – I’m a huge fan of Matt Lucas from Little Britain and I had seen Peter Capaldi’s work and he’s great. There’s a pace and specificity and a respect for writing, rehearsal and theatre that is more cared for here and it shows in the work.

How did you find working with Steven’s script?

As long as we stuck close to what Steven wrote, word-for-word, it was perfect because he wrote something that flowed so well. So if I missed a word, it probably wouldn’t work. This was the first thing I’ve ever been on where I didn’t have an opinion about a line – it was line-for-line perfect. Every single line motivated the next and every single word had a meaning behind it. It was good subtext, it was really good storytelling and when there’s good storytelling, actors are happy!

What appealed to you about the role of Grant/The Ghost?

I loved, loved, loved the old Batman, the old Superman, the old Spiderman because there was so much story and it was more about relationships. The original Superman was this nerd – a nerd who couldn’t get the girl so he created this alter ego in order to be the guy that he couldn’t be and that’s the same with Grant and The Ghost. I really felt it would be fun to play a character that was very much like what Christopher Reeves did with Superman combined with a little bit of what Michael Keaton did in Batman.

Tell us about your character Lucy

I play Lucy Fletcher who in her own way is living a little bit of a double life in that she’s a very successful working mother, she’s a journalist and she’s also been left by her husband so she’s in a difficult position with a very young child. But she’s quite an interesting character in that she’s got lots of different facets – I think a little light turns on when she’s at work and she’s quite hard-nosed and that’s fun to play. In this episode she’s the eye for the audience in a way because even though she feels like she’s in control at the beginning she’s the one that’s the least in the know about what these other worlds and superpowers are. She’s discovering everything as the audience are discovering it so I felt it was my job to really be in the moment with that which is such a fun thing to do when the things that are happening are so extraordinary.

How did the role of Lucy come about?

This role felt like a very early Christmas gift to me because it’s one of those amazing opportunities you get as an actor where you’re just offered something seemingly out of the blue (or out of outer space in fact with this job). I read the script and just absolutely jumped at the chance – it was so fun, so full of energy and vitality and a great opportunity to play a character in Doctor Who that isn’t completely concealed by an alien outfit. It’s really fun to play an American.

What was your reaction when you first read the script?

When I first read the script I was really surprised that there was such a huge superhero theme. Firstly I didn’t even think you could do that on other TV shows – that you could connect yourself to those amazing huge films that have already been so popular that have their own world so that was really exciting. I never thought I’d have the opportunity to do that, and do it in a way that is really different in the world of Doctor Who. It was fascinating to read how Steven was bringing those two worlds together. It’s just so charming – the storyline of Grant and seeing him grow up and seeing the Doctor’s relationship with him – that’s one of the things that’s so special about Doctor Who is the way that he’s able to jump back and forth in time and he (the Doctor) has these different strands and different relationships with people and watching them grow and coming back to them later in life – it’s really lovely to see that as a character. It’s so exciting!

What can audiences look forward to in this Christmas Special?

What do you love about superhero movies?

I love the secret identity, I like the daft superpowers, I like scenes where the two identities being managed by our hero are clashing with each other – they did that beautifully in the Christopher Reeves Superman films and the Tobey Maguire Spiderman movies. That’s what’s interesting, that’s the cool part and you have a certain joyful levity in how you deal with the superpowers because they’re fundamentally silly – you can’t take them too seriously and I think the Superman movies do that so beautifully.

What can the audience look forward to?

© Copyright 2016, All Rights Reserved Powered by WordPress | Designed by Bdaia